Jesus not only wants to make Midlothian a better place, He’s good news for people all over the world. Find out how you can impact the world, join us on a mission trip, and support those called to move their families around the world to share the good news of Jesus.

Want to know more about helping out in one of these areas? Send us an email and we’ll get you all set up. 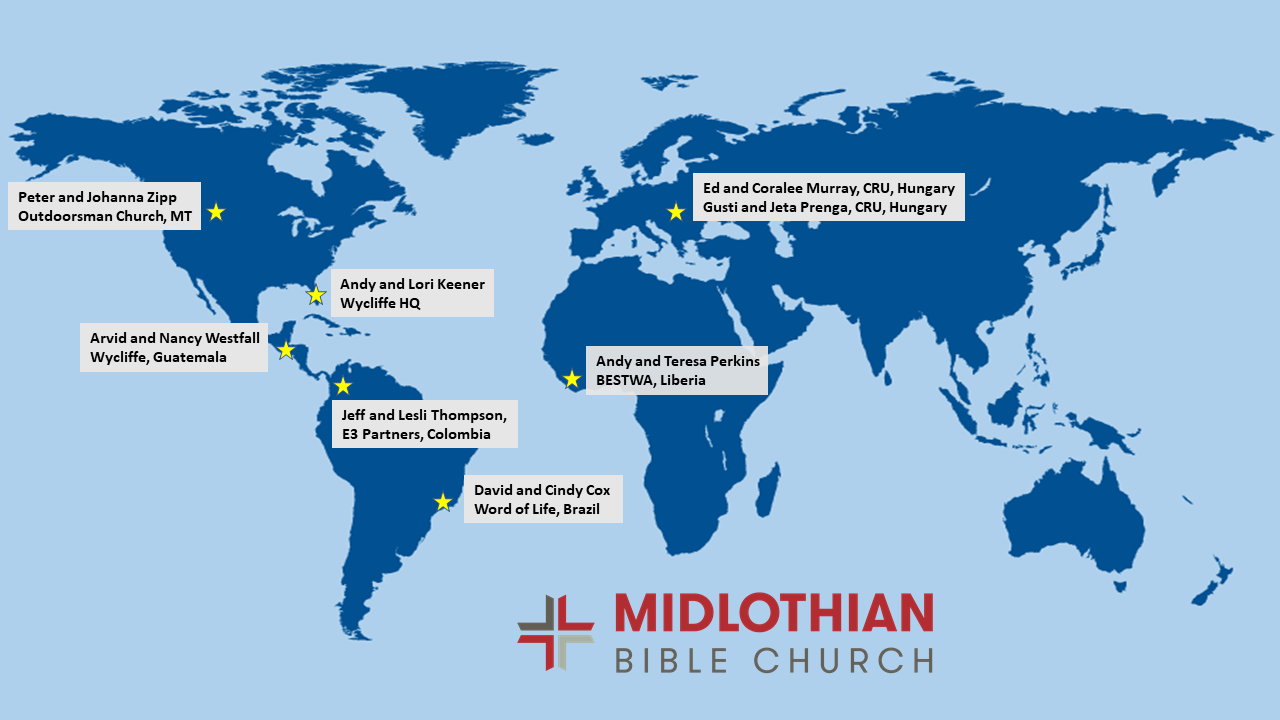 North Texas Food Bank disaster relief mobile pantry will be in the MBC main parking lot on Nov. 4th from 9:30AM to 11:30AM.

There are no income or residency restrictions.

The Worldwide Status of Bible Translation:

Andy and Lori Keener serve with Wycliffe Bible Translators. They grew up in Pennsylvania and were called into the ministry of Bible translation around the age of 20. They first served in Central America, researching Bible translation needs among Caribbean people that speak Creole languages. Later, they spent 9 years serving the Teribe people in the jungles of northwestern Panama, where together with a group of mother-tongue translators, they translated the New Testament and portions of the Old Testament. Since that time, Andy has served in various leadership roles, both in the Americas and in Sign Language Bible translation for the Deaf worldwide. Today, Andy serves as the Senior Director of Global Partnerships for Wycliffe, building relationships with churches, denominations, and Bible translation agencies in countries around the world, so that Wycliffe can serve them as they seek to see God’s Word made available in the communities and languages where they minister. 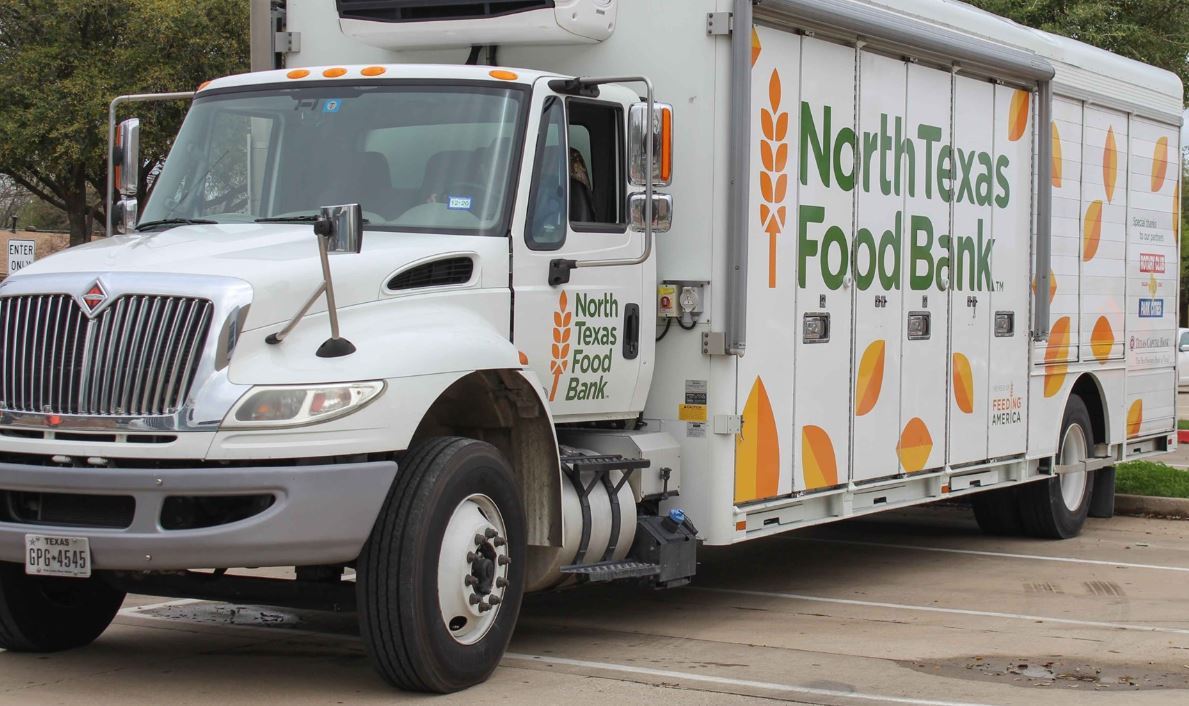 Believe. Belong. Build Up. Be Strong.

Jesus brings good news that changes everything for Midlothian.

Our MBC Student Ministries Assistant is Leah Austin. Prior to joining the MBC youth staff team, she taught for two years and then served on the administration team at NABS, a preschool in Midlothian, for four years. Leah has grown up here at MBC, and you’ll often see her appear as a cute toddler in early church photographs. She formally joined the MBC staff team in 2013. Leah has two adult children: Will and Sara Grace. When not at the church, she loves to spend time with her family & friends. She also enjoys reading and cooking. contact me.

The Senior Pastor at MBC is Matt Reynolds. He holds a ThM from Dallas Theological Seminary and a BA in Elementary Education from Cedarville College. He has served as a pastor both in Missouri and Texas for the last 20 years, but he joined the staff here at MBC in December of 2014. Matt has been married to Elizabeth since 1998 and they have three teenage children: Madeline, Hannah, and Samuel. contact me.

Mike Hogue is the Associate Pastor at MBC. This is a second career for him as he served as a pilot in the USAF for 22 years. He graduated from the USAF Academy in 1991 with BS degrees in Mathematics and Operations Research, and he got his MS in Computer Science from Texas Tech in 1995. After retiring from the USAF, Mike attended Dallas Theological Seminary where he got his ThM in 2017. He came on staff at MBC in July of 2019. Mike has been married to C3 Specialist, Heather Hogue, since 1991 and they have two adult children (Elizabeth and Abby), a current UT Longhorn and ROTC cadet (Josh), and a high-schooler (Chloe). Although on the mend from shoulder surgery, Mike loves playing racquetball & the guitar, computer programming, and going to estate sales on Saturday mornings with his wife, Heather.

Lydia Weldy is our MBC Children’s Ministry Director. She has a BS in Food Science from Texas A&M (2009) and an AAS in Dental Hygiene (2007). She joined the staff at MBC in August of 2018. Lydia is married her foil, Christopher, and they have three children: Otto, Meredith, and Edison. When not renovating their new fixer-upper “lake” house, her interests include gardening, sewing, and grocery shopping. contact me.

Ezekiel (Zeke) Garcia is the MBC Student Ministries’ Pastor.  Prior to coming on staff in May of 2020, he worked at various times as a worship pastor, youth pastor, and camp counselor in Arkansas and Missouri.  He is also a Christian Hip Hop artist.  Zeke has been married to Karlee since 2012 and they have three children (with another arriving in November 2020!).  Zeke’s interests include writing, playing, and recording music.  He enjoys playing sports of any kind—but he especially likes basketball. He also enjoys spending time with his family, game nights, and going to the movies.contact me.

Our MBC C3 (Communications, Community, and Connections) Specialist is Heather Hogue. She has a certificate of Biblical Studies from Colorado Christian University (1991), a BA in English from Texas Tech (1994), and an MSEd from Old Dominion University (2011). She taught middle and high school English for 13 years before coming on staff at MBC in July of 2019. She has been married to Associate Pastor, Mike Hogue, since 1991. Be sure to ask about how they met as military brats in high school. It’s a great story. They have two college graduates (Elizabeth and Abby), a current UT Longhorn (Josh), and a high schooler (Chloe). She spends most of her free time looking for interesting (or not so interesting) items at estate-sales in the DFW area with Mike. contact me.

Educational background/work experience: Before moving to Midlothian, I was a licensed real estate appraiser for Erath County. In 2004, I left my career to be a stay at home mom. In 2011 we moved to Midlothian. Soon after I began substitute teaching and office clerk for MISD campuses. Currently in children’s ministry, which I love!

Family (spouse & children with ages): Married: Have been married to Ramiro for 31 years. Kids: Chriselda {Chris} – 30 (married to David Penn, granddaughter-Brinley-6 and another granddaughter on the way in April), Abigal {Abby} 24 – (married to Ernan Vasquez, two granddaughters – Myranda-5 and Carolina-4) Lucas – 15, and Isaac – 13

Outside interests/what you do in your spare time: Spending time with family and listening to music.

The MBC IT Administrator is Sherri Hatcher. Sherri attended Angelo State University and Texas State Technical College. She was the Network / VoIP Specialist for City of Irving and owned a healthy vending business for four years. She also is a Certified Health Coach through IIN. She was the MBC Youth Secretary for two years and has served MBC as an IT professional for the past 10 years as both a volunteer and employee. She married Bill Hatcher in 2001. They became a blended family with each having two sons from previous marriages, and they adopted a son in 2006. They also have two young grandsons and want everyone to know that being grandparents is awesome! Sherri loves to read and learn new skills. She also has a hobby garden where she plays around with growing herbs and vegetables. contact me.

Stephanie Vest is our MBC Preschool Ministry Coordinator. She has a BA in Mathematics from San Diego State University and was a high school math teacher for eight years. She joined the staff here in July of 2017. Stephanie is married to Tom and has been since 2009. They have two young children: Thomas and Eleanor. She’d like you to know that she has no spare time because she and Tom are new homeowners, but she does enjoy coffee, cookies, and Chick-Fil-A with my family and friends. She also has an off-and-on-again relationship with reading and running when she is not watching shows and playing games with her family. contact me.

Name: Corbin Wadkins
Job title: Ministry Intern
Educational background/work experience: I received my undergraduate degree in Biblical Studies from South Western Baptist Theological Seminary and will be attending Dallas Theological Seminary in pursuit of ThM. I have worked in Church youth ministry for 6 years, as well 7 summers serving at Mt. Lebanon Baptist Encampment.
Joined the staff at MBC: 11 March 2020
Outside interests/what you do in your spare time: I enjoy many outdoor activities such as cliff jumping, disc golf, and rock climbing. I also enjoy a variety of video games and table top games.

Corbin Wadkins is the new ministry intern at MBC as of March 2020. He received his BS in Biblical Studies from Southwestern Baptist Theological Seminary in 2018. Corbin will be starting a ThM program with a focus on biblical counseling in the fall of 2020 at Dallas Theological Seminary. Previously, he worked for six years in various roles at Mt. Lebanon Baptist Camp. He currently serves in the MBC Middle School ministry and began MBC’s YAMs (Young Adult Ministry) program in 2019. In his free time, he enjoys many outdoor activities such as cliff jumping, disc golf, and rock climbing. He also likes playing games that let him interact and enjoy the company of others.
contact me.